The history of ice cream is rooted in ancient Asia, namely, China and Arabia. It was admired by Alexander of Macedonia, Napoleon, and George Washington, and patented by several people. 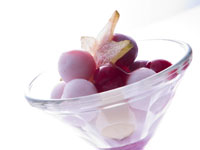 The researchers found that ice cream can be traced back to the 3rd century B.C. Chinese Emperor and his nobility were served concoctions of fruit juices with snow and ice. The recipes of the unusual dessert were kept secret, and were revealed only in the 9th century B.C.

There are references stating that cooled juices were very popular in the palace of the legendary King Solomon, and that the famous ancient Greek physician Hippocrates recommended ice cream for a better tonus and health improvement. Alexander Makedonsky was treated with ice cream during his trips to India and Persia.

Snow and ice were used in ancient Rome to prepare fruit drinks, for example, for the Roman emperor Nero (A.D. 37-68) who ordered ice to be brought from the mountains. Large ice cellars were built to preserve the frozen treat for extended periods of time.

There are a few interesting facts in ancient records in reference to ice cream. In 780 A.D., caliph al-Mahdi managed to deliver a supply of snow to Mecca using a train of camels. A Persian traveler Nassiri Khosrau mentioned in his writings that in 1040, the snow for beverages and ice cream was delivered to the table of the Cairo Sultan daily from the mountain regions of Syria.

Marco Polo, who traveled to China and tasted the icy dessert, is thought to have brought ice cream to Europe. When he came back to Italy from his trip, he shared some of the recipes with local chefs. In the middle of the 16th century, ice cream conquered France when Ekaterina Medici fell in love with this dessert. She treated her guests with ice cream at formal dinners and fed it to her son, Henry III.

Soon enough, ice cream migrated from Versailles to the households of French nobility despite strict prohibitions on recipe disclosure.

Many new varieties of ice cream were invented in France during the reign of Anne of Austria, Queen of France. In the middle of the 17th century, ice cream became available to ordinary mortals, and ice cream and ice beverages vendors flooded the streets of Paris. Later, Napoleon himself became an ice cream enthusiast.

Ice cream recipe came to the US in the 18th century along with the English immigrants. In 1700, Governor Bladen of Maryland, who was from England, served fruit ice cream and cooled beverages to his guests. Many US Presidents were fond of the cold dessert. George Washington himself used to prepare ice cream at his Mount Vernon estate.

Phillip Lenzi, an entrepreneur and chef, posted an ad in New York newspapers saying he brought recipes of different desserts from London, including the ice cream recipe. Soon ice cream acquired popularity among the residents of the East Coast.

With time, technologies of ice cream manufacturing were perfected. Ice cream cups were invented in France during the reign of Napoleon III (1852 — 1870). Assorted ice cream was first created in Italy, and chocolate was first added to the treat in Austria. In 1866, the guests at the Chinese ambassador reception in Paris were served an “omelet with surprise” designed by German chefs - an omelet with ginger ice cream inside. New ice cream varieties created for special occasions were later mass produced, especially in the US. The first ice cream factory was built in Baltimore, and soon similar factories appeared in New York, Washington, and Chicago.

Cooling equipment was also developing. A French engineer Ferdinand Carre invented the ammonia vapor-compression system in 1859. Mass production of refrigerators began in the second half of the 19th century. Later, special equipment for production and storage of ice was invented, which allowed for easier processing and lower price of ice cream.

In 1919, a teacher from Iowa designed a recipe and production technology of new ice cream variety covered with chocolate. On January 24, 1922 he was granted a patent for famous ice cream bar on a stick. The novelty was first called Eskimo pie, but later reduced to Eskimo. Meanwhile, the French claimed that this type of ice cream was created by one of their own in 1919. According to French sources, the name of this treat was created by accident in a movie theatre. One of the movie goers had too much ice cream while watching a film about Eskimos, and called the dessert “Eskimo.”

In Russia, since the old times people made their own version of milk-based ice cream. In Kievan Rus’, people enjoyed chipped frozen milk, and for the Pancake week they prepared a mixture of frozen cottage cheese, sugar, raisins and sour cream.

Milk-based ice cream was a part of the menu of Peter III and Katherine II. It was homemade and prepared in small quantities only . The first ice cream machine was introduced to Russia only in the 19th century, and commercial production of the dessert was commenced in the early 1930s.

Ice cream is now enjoyed by people all over the world, and is sold in nearly every grocery store. There are thousands of varieties of this cold, five thousand-year-old dessert.