Ten Things All Women Hate about All Men

Have you ever thought something like “Men are terrible creatures.. They wage wars, start conflicts and then blame us for everything saying that all they do they do it for women. They demand impossible from women expecting them to do dishes, cook, work, and look like women on magazine covers. At the same time, men are incapable of doing anything they consider unpleasant. They behave as though it’s a man’s world, but do they have a right to it? What can a person demand if he is not capable of doing his own dishes? It turns out that even the most peaceful and loving wives feel this way once in a while. We conducted an opinion poll to find out what are the top pet peeves wives have about their husbands. 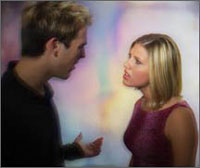 Ten Things All Women Hate about All Men

This one is the basis for all other faults since a selfish man is convinced it is his world, and you are entitled to follow him wherever he goes whether you want it or not.

The reality is not that bad. Of course, men can be selfish, but please understand them. They feel lonely because they cannot bear children. Men’s games for the right to be on top cause additional stress. It is not easy to keep trying to prove something to yourself and the world all life long, hence selfishness.

2. Indifference to the wife’s family

He is always ready to take care of his own family, but keeps telling you that your mother (sister, friend) does not know much about life. You can get offended or try proving that you relatives are, in fact, very bright people. But it is a waste of energy. Just tell him: “No matter what they are like, I still love them and they will always be a part of my life.” If he does not want to celebrate you grandma’s birthday, don’t be upset. You can party just fine without him.

Even clearing a plate can be a problem , let alone washing it . But in his family, his mother was the one who did dishes, and he expects the same from you. Even if you work 5 days a week and not 2 like his mother and hate doing dishes. Try leaving his dish unwashed after every meal. It will take him some time to notice, but he will.

4. Watching a soccer game at the maximum volume

Soccer is an “intellectual game” where 22 guys are catching one ball. The game seems more important to him than your peace and your kid’s sleep. At the very least this is the time when he is not to be bothered with any questions. But when you are watching a movie, he is entitled to ask silly questions every five minutes, and demand that the sound is off because he has a headache. To solve the issue, you should have two TVs and place the one intended for him in the kitchen or a den. This way, you will be able to enjoy your movie or sleep if the doors are shut.

Men sometimes know better than their wives where things are stored. But for some reason it is the wives who have to look for their things because men are too busy. They cannot decide on their own which pair of socks to wear, they have to bug you. It would be easier to give him a special shelf or a closet where he can keep all his belongings. If he can ’ t find something , it ’ s not your problem . You know where your stuff is .

6. His belief that his work is more important

This one comes from fault number one. If a man suggests that something can be more important than his business, his world might collapse. Please be companionate as he is very dependent on the opinion of others. Do not pay attention to his comments (unless they are made in front of someone else). You know you are worthy.

7. His belief that women are bad drivers

Men have better concentration and faster reaction due to the level of testosterone in their bodies. Women have to spend more time practicing. But one day your spouse will understand that arrogance on the road is not good either.

8. His habit to embarrass you in front of others

It is always embarrassing when spouses criticize each other in front of other people. If your husband acts differently when you are alone, it has to do with his complexes and his desire to seem better than you. Discuss the issue with him . If he continues to criticize you, refuse to go out with him. Even the most stubborn man will sooner or later realize that it is not in his best interests.

9. When you leave on a business trip, he does all the chores with ease, but as soon as you come back, he pretends to be a helpless baby

When you come back from a trip, praise his talents and make him believe that a real man should be able to do everything, even dishes. Try to divide responsibilities equally. If you failed to do it in the beginning, continue praising him for every little thing he does.

10. Instead of doing something, he talks about it

This happens because he has to demonstrate his story-telling talent and avoid responsibility. Do not buy it . Listen to him respectfully and then say “See, you are so good at it, unlike me. Now you know that you are the only one who can handle the task.” If he still refuses to do the work, you are entitled to refuse to do your chores, too, for instance, cooking dinner. Why not ?