Ghost-Inhabited Castles Renovated To Be Hotels of Horror 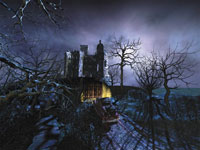 Ghost-Inhabited Castles Renovated To Be Hotels of Horror

A guide with a sepulchral voice starts his story about bloody events that took place here once upon a time, and about otherworldly habitants of the castle. The tourists carefully listen for a mysterious squeak or footsteps of an invisible guest.

The entire experience is a careful calculation. Sometimes museums owners organize phantom “presence affect” by scaring their visitors with the sounds of afterworld. Some even hire people to walk around the castle disguised as ghosts.

Glamis Castle is one of the most famous Scottish haunted castles. It used to serve as a hunting lodge for Scottish kings. The modest status of the lodge did not interfere with its popularity. It was the house where Malcolm II King of Scotland passed away from battle wounds.

In 1372, the lodge came into possession of the Bowes-Lyons, Earl and Countess of Strathmore and Kinghorne. The Queen Mother Elizabeth, who recently passed away, belonged to the Bowes-Lyon s family. The castle features a secret room with a walled-up entrance.

The legend goes that the ghosts of a Strathmore Earl and his friend live in the castle. They once decided to play cards on Sunday, and the devil punished them by making them play cards in the secret room after their death. They say that on Saturday nights, when you press your ear against the wall at the place where the entrance should be, you can hear two ghosts talking.

According to a legend, another room, Duncan Hall, inspired Shakespeare’s Macbeth. They also say that sometimes the spirit of Janet Douglas can be seen in Glamis. She was accused of witchcraft several centuries ago and burnt alive by the order of King James V of Scotland. A ghost of a page-boy often appears in the living room of the Queen Mother and quietly awaits orders.

No one knows where other two Glamis ghosts come from. A Mysterious Gray Lady comes to the building and its whereabouts, and a knight clad in armor who likes to look at the faces of sleeping people visits the guestrooms.

Inveraray Castle built in Scotland at the end of the 17th century is still a family residence of the Campbell family, and only a part of the castle is open to visitors. The castle’s history is rich with legend. For example, they say that Duke Argyle’s harpist was murdered there and her ghost still bothers the castle residents.

Once, centuries ago, a picture of a battle between Scottish and French soldiers appeared in the sky above the castle. Soon the news came in that many Scottish people died during an attack on a French Fort.

Some haunted houses are transformed into hotels. Usually these hotels are more popular among tourists than traditional ones and more expensive.

The Dornoch Castle Hotel is one of them. In the middle of the 14th century, the building was razed in internal feuds between the Sutherlands, its owners, and Gordons, their neighbors. Several decades later the castle was rebuilt.

In 1567, Duke and Duchess Sutherland were poisoned in the Helmsdale Castle . That night, the walls of the Dornoch Castle were shaking. To this day the ghosts of the spouses and other inhabitants of the castle roam within its walls.

Other parts of these hotels’ interiors look quite civilized. Only at night, window shutters and floors make squeaky noises. Most fearful visitors will find a Bible inside their nightstand and a carafe filled with whisky at their headboard. A sip of whisky, and ghosts aren’t that scary any more.