House cockroaches began to disappear in Moscow during the beginning of the 2000s. Many Russians were even making jokes about it saying that it was one of advantages of Putin’s regime. 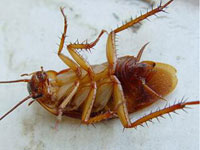 Muscovites have been living side by side with cockroaches for 200 years. When insects disappeared, many found it very strange and unusual. Some people said that cockroaches could not survive the influence of cellular networks, genetically modified food and other novelties of modern times.

Dmitry Zhuzhikov, Russia’s leading entomologist found a much simpler explanation to the phenomenon of disappearing cockroaches.

Cockroaches traditionally infest historical centers, where age-old communication systems and timber floors are plentiful. The historical center in Moscow has been changing drastically during the recent several years. Many shabby apartment buildings on the outskirts of the city were demolished. As a result, people created an unfavorable environment for the insects.

Restaurants and supermarkets, furniture-making works and meat-packing plants began to vehemently exterminate the insects. A cockroach seen in a diner or a hairdressing salon may lead to serious consequences for businessmen. Many shops and cafes were closed in the city because of cockroaches. It was even reported that entrepreneurs were waging cockroach wars against competitors.

It goes without saying that it is impossible to exterminate all cockroaches in a big city. However, the insects have become fewer indeed. Many insect and rat exterminating firms, which appeared in Moscow, also affected the population of cockroaches.

One of such private entrepreneurs, Lev Akinchenko, an electrician by education, exterminated millions of cockroaches, as he said. The man said that a regular Moscow food store is a home for about 3,500 cockroaches.

“Cockroaches prefer problematic families. Those people who have a high income and or higher education, do not have cockroaches in their homes, as a rule. Pensioners mostly complain of rats, not cockroaches. Metrocockroaches is a special category – they are commonly known as “Americans.” They live in tunnels – it is too dry for them in apartments,” the man said.

Cockroaches, like any other synanthropic creature, are very sensitive to changes in the lifestyle of the human society. Just like humans, cockroaches are subjected to economic, social and political changes. The changes made them retreat by the middle of the decade, but they will return once people make a step back.