Mankind Will Never Know Who Napoleon Was

August 15 was the 240th anniversary of Napoleon Bonaparte's birth. There are just a few individuals in the history of mankind who keep such enormous interest to their own personas for centuries. 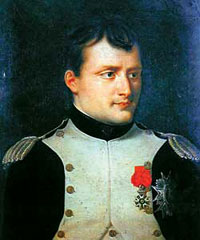 Mankind Will Never Know Who Napoleon Was

Every new generation of historians and fictionist write new biographies of the well-known Corsican, but all the secrets still remain undisclosed.

The main secret is how a common provincial man managed so make a breathtaking career in politics and become the first person in the greatest country of Europe at age 30. Such a career can not be explained with rational arguments. Only superhuman powers could influence the situation.

Being the cadet of a military school, young Bonaparte made a record in his copybook: "Saint Helena. Small Island. 1815". It means that Napoleon could foresee the future if he could predict his exile 38 years before it.

Napoleon was speaking about himself: “I have an internal feeling of that I am expected … My great talent is clearly to see a perpendicular which is shorter than a curve.”

The knowledge of what would happen, defined the inhuman bravery of this slender young man of a low stature. He was afraid of draughts and was subject to fainting-fits but he was the first to go under the massed intense fire when it was necessary.

Many times Napoleon managed to have a narrow escape during fights and even during attempt on his life.

Napoleon, certainly, knew about his phenomenal ability to escape the danger several seconds prior to the unrecoverable. “You are afraid that I will be killed in the field? I feel that someone pushes me to the purpose which I myself do not know. As soon as I reach it I will be useless and even atom will be enough to kill me. But until that no human efforts will make anything - no matter where, in Paris or in army.”

Bonaparte seemed to brave his fatalism. He faced fearlessly the bullets.

Napoleon could work for eighteen hours without rest the same way he could fight without fear. Spirit, the emperor said, cannot get tired – it is only soul and body that grow weary.

The destiny, which constantly called Napoleon somewhere, eventually brought him on the deserted island of Saint Helena in the autumn of 1815. It happened precisely in the term predicted by him. Here the frustrated world ruler closed his days six years after. He was either poisoned or decided to finish his meaningless existence himself.

Mankind will never know who he was.