Turkey has always been the favourite seaside resort for the Germans. In 2008 about 4.4 million German tourists visited Turkey. Most of them had a rest in the Turkish Riviera. But in this season the Russian tourists outnumbered the German ones. Moreover, the Germans are concerned about the increasing competition with the Russians. 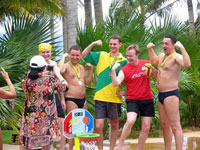 The German tourists are displeased by the Russians. Many Germans complain of their bad manners. They have to fight for sun beds on the beach and in the night the Russians disturb the Germans by their whoopees.

This June the tourists arriving from Russia surpassed the German citizens on the total number of visits to Asia Minor. The numbers are 481,300 Russians against 478,400 German holiday makers a month.

The results of this tendency are already clearly seen. The 'Kremlin Palace' hotel was built in Antalya, designed to replicate the famous building. The owner of the hotel is a Russian oligarch Telman Ismailov. Ismailov invited American film stars Sharon Stone and Richard Gere and singer Tom Jones for the opening ceremony.

They admire Ismailov in Turkey, though in Russia he is losing his power. After Russian Prime-Minister Vladimir Putin criticized the businessman investing billions abroad, Ismailov appealed for Turkish citizenship.

Statistics shows that 20 million Russians visited Turkey during the recent 16 years. In 2008, three million Russians spent their holiday in Turkey, which means a 17-percent increase in the number in comparison with 2007. As early as then, the Russian tourists took the lead by the volume of expenses bringing Turkey the annual revenue of $2 billion.