Why Does Britney Spears Lip-Synch?

Britney Spears made two stops in Russia within the scope of her world tour titled “The Circus Starring: Britney Spears” – in St. Petersburg and Moscow. The cheapest ticket for her Moscow show, which took place on July 21, was priced at $70, whereas the most expensive one was available at $1,000. 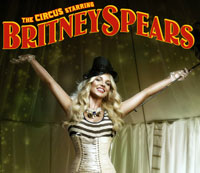 Why Does Britney Spears Lip-Synch?

It was Britney’s eighth world tour and her first-ever visit to Russia. In Moscow she played at the Olympic Stadium – the house was packed.

When the show started, all the people in the audience noticed immediately that Britney was lip-synching. Many hoped that it would only be in the beginning of the show, and that the pop princess would soon switch to live sound. However, it did not happen. The whole show was lip-synched with no live sound at all. That was probably the biggest trick of Britney’s Circus.

It seems very strange that such a major pop star as Britney Spears affords so much sloppy work. Does anyone criticize her lip-synching in the West? Elton John once said, sharing his impressions of Madonna’s Re-Invention Tour, that anyone lip-synching on stage should be shot. He did not say that Madonna lip-synched only the first two songs of her show during that world tour in 2004. The rest was played live. Britney decided to do playback only. A Kalashnikov, anyone?

The majority of people attending the Moscow show were disappointed with Britney’s performance as they were leaving the stadium.

It is worthy of note that the company organizing Spears’s show in Russia did not have to feed the pop star. For some strange reason, Britney decided not to eat anything of the Russian cuisine. Does she think of Russia as a country where wild bears can be spotted anywhere in any city? This way or other, but the signer brought her own cook and her own food.

Britney Spears was reportedly supposed to make a special guest appearance at Russia’s MTV Music Awards ceremony this year, but she asked for $600,000.