A couple from Russia’s St. Petersburg named their newborn baby boy Mahmoudahmadinejad. The baby, born in a Muslim family, was named so in honor of Iran’s sitting President Mahmoud Ahmadinejad, Interfax reports. They simply took the name of the president and put the two words together to have a name for their baby. 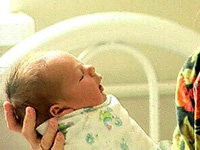 “The birth certificate has already been issued,” Rinat Valiyev, the head of a local Islamic organization said.

The baby with such an unusual name is the sixth child in the family of the Muslim man from Bangladesh and his wife, a Russian Muslim. The man holds a temporary registration to reside in St. Petersburg, whereas his wife is registered in the region. The family rents an apartment in St. Petersburg.

The baby’s parents said that they decided to name the baby in honor of the Iranian president because they appreciated the politics, the intelligence and the benevolence of Mahmoud Ahmadinejad.

“If we had to move somewhere, I would not refuse to live in Iran. There is stability there, and its president is not afraid of anyone, except Allah,” the baby’s mother said.

It looks like the woman is totally unaware of what has been happening in Iran recently.

Several dozen families camp outside Iran's daunting Evin prison, trying to learn the fate of loved ones who vanished in post-election turmoil. A month into the government crackdown, the number of killed and arrested remains unknown, but human rights groups believe the death toll is far higher than the official figure of 20, The Associated Press reports.

The crackdown on the gigantic rallies that broke out after Iran's disputed June 12 presidential election was chaotic. Not only regular police, but also plainclothes Basiji militiamen linked to the elite Republican Guards were involved in beating or firing on protesters, dragging some away in covered trucks to unknown locations.

The protests were sparked when opposition candidate Mir Hossein Mousavi claimed he was the victor and that official results showing a victory for hard-line incumbent Mahmoud Ahmadinejad were fraudulent.

Meanwhile, relatives of many of those known to be imprisoned have been unable to find their loved ones, much less communicate with them. There are widespread fears that detainees held in special Revolutionary Guards facilities or other secret locations are being tortured or abused.