A flock of furious crows invaded the territory of one of the hospitals in St. Petersburg. The crows attack all the people who come to "their territory", including patients and doctors. Defenceless doctors do not know what to do. 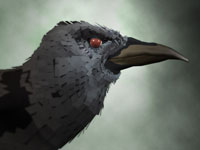 In order to protect the patients from the bloodthirsty birds, the administration of the hospital put a warning sign on the entrance door: "Danger! Man-eating Ravens!"

“We are desperate! They consider themselves to be the full-fledged owners of this territory. When the crows came to our area, pigeons, cats and even stray dogs disappeared. Our defenceless workers are afraid of going out. One of our nurses has already fallen the victim of those monsters. The whole flock attacked her and injured her severely,” says the chief doctor of the hospital Fedir Baranovski.

The doctors turned to the local authorities, however it did not bring any results. The doctors had to use electric shockers to protect themselves.

The sound of the electric shocker deters monsters. The entire medical personnel is now armed with shockers.

According to the centre for animal rights protection Vita, the crow-killing as a popular movement of city bird hunters took shape in 2005. A few hundred crow killers shoot the birds in Moscow and vicinities. Most of the hunters are the well-off types who shoot out the windows of their cars. An average crow killer can shoot down a few dozen birds during a hunting trip; at times the dead crows are nailed and bound to the trees. The shooting can take place at dumps, yards and playgrounds.

“I spotted hundreds of crows while visiting a zoo with my kid,” a shooting enthusiast nicknamed Over shares his impressions on a crow killers' web site. “I was really in the mood for shooting when I got back home. I picked up my gun as my child fell asleep. I saw a large crow sitting on a well-zeroed tree. After opening my balcony door, I took aim at the target and pulled the trigger. The crow fell to the ground. Then I saw more crows coming in as if to pay tribute to the dead fellow, a crow funeral was happening right before my very eyes. So I fired a few pellets more. In total, I did five crows in. Needless to say, it was a truly exciting experience.”

So it seems that crows decided to take revenge on people.