Woman’s silicon breasts burst as she lands in California

A female passenger from Russia had her silicon breasts ruptured as she landed in an airplane in the United States . The 45-year-old woman from Moscow was hospitalized urgently, Life.ru website reports. 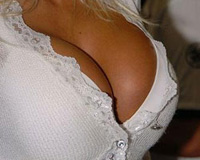 Woman’s silicon breasts burst as she lands in California

The woman, identified only as Irena D., decided to spend her holiday on the beautiful beaches of the transatlantic coast. She boarded a Boeing-767 at Moscow’s Sheremetyevo Airport with a hope that in about 14 hours she will be enjoying the sun of California.

The woman felt sick already during the flight, but she thought that it was the pressure. When the jetliner landed, the woman collapsed at the airport. It took US doctors a while to find out the reason which ruined the woman’s health so quickly. It turned out that her silicon implants had been damaged.

“The flight per se could not damage the implants. Most likely, she already had problems with them before, and the implants burst because of the pressure differential on board the plane,” a doctor said.

Irena will have to spend her entire holiday in California in bed. She will also have to bid farewell to her treasure which she implanted to attract men’s attention. Another breast augmentation surgery may lead to severe consequences for the woman.