“Life is good, and I like living...” These words were the last that were written in the diary of Alina Ponamareva, a student from the Russian village of Balezino. She was found dead in a dormitory. Doctors said that her heart stopped beating because her body was absolutely exhausted. 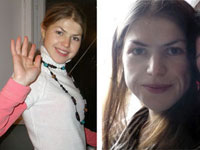 Alina was brought up in a well-to-do family. Her mother was a teacher and her father was a respected businessman in their region. Her brother and sister were studying in Moscow. Alina did not want to go far away from her family so she decided to enter the institute in the town of Glazov, which is situated not far from her native village.

“She is very stubborn. She wanted to be perfect in everything. Her studies did not seem to be difficult to her. She was even a bit bored with her classes. Then she probably decided to improve her appearance and to lose weight,” her mother says.

The story began two years ago. Alina suddenly decided not to eat meat and home-cooked pies that she liked so much. When she would visit her parents for a weekend she would only eat curds and fruit. She also asked mother to cook food on steam. However, that was only a beginning.

Later Alina started visiting her parents rarely. Her mother noticed that her face became skinny. Alina was fading away. Alina’s mother was desperately trying to make her daughter eat and was buying delicacies for her. Alina ate very little saying that she was not hungry.

“After a year of such a diet Alina looked like an old lady and her face became blue,” says Maria, her friend.

Parents were really worried about their daughter’s health and started showing her to doctors. However, none of the doctors diagnosed anorexia. Doctors just told the parents that everything would be ok if their daughter would start eating again.

“Then we tried to solve the problem ourselves. We read a lot of books and different medical websites. Finally we found out that our daughter was having anorexia," the parents said.

After the medical treatment Alina became calm. She did not quarrel with her parents about her diets any more. However, she continued starving herself and became unsociable. She lost about 20 kilograms over a two-year period. She weighed only 35 kilograms while she was 161 cm tall. She lost any interest in her friends and even her boyfriend.

She almost stopped visiting her parents. One day her parents were extremely worried because they could not reach Alina on her cell phone. So they went directly to her dormitory and broke the door. They found their daughter lying on the floor. It was too late to help her. There was a book on her table called “Hunger Treatment”. It was opened on the page with a chapter “How to lose weight in 12 days”. There was one day left till the end of the course…