Today Misha Zhelaev, a 6-year-old boy from Ulan-Ude, can play with his friends, read books and prepares to start his school studies next year. 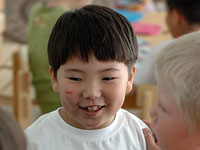 Two years ago the boy got into a terrible car accident. His mother and relatives died. Nobody hoped that the kid would be able to survive. Doctors from the local hospital handed the child to his grandmother 1.5 month after the accident. They said that the boy would not be able to wake up from his coma. However, the grandmother did not give up. She turned to local lama-healers.

Zorikto-lama, a well-known local healer, visited the boy every evening to make point massage while traditional doctors were just shrugging their shoulders.

Every morning the grandmother would tell the boy: “Wake up! Let’s go to the kindergarten! Your friends are waiting for you…”

And one day a miracle happened. One morning the boy opened his eyes and moved his hand. He did it unconsciously. One week later the boy managed to raise his head up. And 3 month later the boy was able to sit on his bed. The doctors were shocked but still they could not believe that the boy recovered his memory and consciousness.

“He looked very disappointed and frustrated when he saw someone’s things on his place,” says Galina Koltchina, the kindergarten’s supervisor.

Misha immediately recalled his kindergarten friends Kirill and Mityp. He started visiting his friends more often and six months later he resumed his studies on a regular basis.