Vladimir Zhironovsky, the leader of the Liberal and Democratic Party of Russia (LDPR), wrote a letter to Susan Boyle, a housewife from Scotland, who was admitted to hospital having a nervous breakdown after the grand finale of Britain's Got Talent TV show. 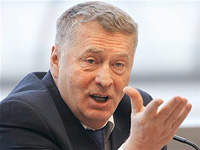 “Susan, you have gained popularity and many fans and even die-hard fans. The media dedicate numerous articles and websites to you. This is fame! You are a celebrity ! Do you have to be sorry about coming second in the show? I am sure not! You don’t have to take it to the hospital, it is not worth it,” the official website of the party quoted Zhirinovsky’s message.

“We have a joke here in Russia. Who is Brezhnev? He is a political figure of Alla Pugacheva’s era (Alla Pugacheva is the most popular pop singer in Russia and the Soviet Union, an icon of Russia’s pop culture – editor). The dance group that took your victory will only be famous just because they won the battle with Susan Boyle herself,” the Russian politician wrote.

“The Russian people support our party. However, just like it happened to you, we do not win the elections all the time. This is not the reason for us to be upset. One has to move forward, and be sure of oneself! Get well soon and please know that you have so many victories ahead of you,” Vladimir Zhirinovsky wrote.

Vladimir Zhirinovsky is a Russian politician, colonel of the Russian Army, founder and the leader of the Liberal Democratic Party of Russia (LDPR), Vice-Chairman of the State Duma, and a member of the Parliamentary Assembly of the Council of Europe.

At the height of its fortunes, the LDPR gathered 23 percent of the vote in the 1993 Duma elections and achieved a broad representation throughout the country - the LDPR being the top vote-getter in 64 out of 87 regions. This fact encouraged Zhirinovsky to once again vie for the presidential office, this time against incumbent Boris Yeltsin. The fact that Yeltsin's candidacy seemed seriously challenged by Russian nationalist groups and a rejuvenated Communist Party alarmed many outside observers, particularly in the Western world, who were concerned that such developments posed a serious threat to the survival of Russian democracy, already in a very fragile state. Zhirinovsky became a focal point of harsh criticism and seemed to be the living embodiment of authoritarianism and militarism in modern Russia .

For his own part, Zhirinovsky has done a great deal to foster a reputation as a loud and boisterous populist who speaks on behalf of the Russian nation and people, even when the things he says are precisely what many people, at home or abroad, do not want to hear. Zhirinovsky infamously promised voters in 1991 that if he were elected, free vodka would be distributed to all. Similarly, he once remarked, during a political rally inside a Moscow department store, that if he were made president, underwear would be freely available. He has on several occasions been involved in altercations with other politicians and debate opponents. As a candidate, Zhirinovsky also took part in the 2000 and 2008 presidential elections, promising a "police state".