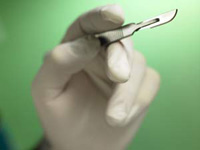 As Kellogg affirmed, “circumcision in infancy is the remedy which almost always helps”. The operation, he added, should be done without anesthesia so that pain that follows should get its impact on psyche. It should be somehow connected to the idea of punishment. “Perverse forms of sexual delight in women could be treated through the calopuncture of clitoris with carbolic acid,” he wrote.

Circumcision is an ancient ritual that came to many cultures from Ancient Egypt. Children from Islamic and Jewish families are still exposed to the procedure. The procedure is normally performed with the use of anesthesia, of course.

Talking about the necessity of the ritual is churlish. Nonetheless, Australian doctors decided to deal with the issue.

By the end of the 1970s, there were two medical lobbies formed in the USA and Europe . The first one of them said that circumcision was a perfect prophylaxis against infections and cancer; The other stressed the complications that could follow the procedure.

From the medical point of view the benefit of circumcision is that it does not leave a “pocket” on the penis, which may accumulate various viruses and bacteria. This not only diminishes the frequency of primogenital infections but also reduces the risk of cervical cancer in women who mell with circumcised men. The transition of the human papilloma virus, which may trigger cancer, diminishes substantially in such cases. The circumcision in men saves them from the penis cancer.

Besides, circumcision allows to save 90 percent of funds spent on the treatment of genitourinary infections in boys.

In the meantime, the adversaries of circumcision are inclined to think that all that money will be spent on struggling against the complications of the procedure. Bleeding and the contamination of operational wounds are most frequent at this point. Sometimes complications end up in repeated operations including the amputation of the penis. Besides, this type of surgery affects the nerves responsible for the sensitivity of the male genitals.

Since infants are operated on without narcosis, circumcision is painful for them and may hurt the infant’s psyche. As a result, men may develop a widely spread condition - the post-traumatic stress which haunt men throughout their lives.

At the same time, doctors performing the surgery constantly improve the procedure and make it less and less painful. The probability of the psychic trauma is also diminishing.

Some scientists are of the opinion that apart from the psychic trauma, circumcision leads to the undervalued self-estimation, unjustified spite or depression. So due to this and other criteria the circumcision once appearing as a tradition would not leave the society for long time.

Circumcision traumatizing penis nerves diminishes its sensuality. Hence the surgical technique is becoming more and more sophisticated so these injures are insignificant now.

Researchers state that sexual disorders in circumcised men still persist due to the immobility of the penis skin.

Male circumcision may affect female life: the orgasm in women having sex with circumcised men comes far more seldom. Other studies on the contrary prompt that men circumcised in childhood are more inventive in sex technique.

Many things may now be classified as violations of human rights. So it is no surprise that someone is questioning parents’ rights to circumcise their children.

With due consideration of the freedom of belief a peculiar compromise was found in the United Kingdom : a doctor may refuse to perform such an operation if he or she thinks it may violate the rights of a child. Vice versa, nobody will condemn parents if they turn to another surgeon.

In countries where circumcision is not common, there were cases when children accused parents of the “irreversible surgical transformation of healthy genitals”.