A four-year-old girl having animal habits was found in the city of Chita, in Russia’s Baikal region, Siberia. The little girl was living with her relatives, but she hardly could be referred to as a normal child. 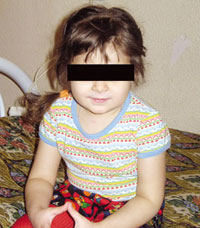 An anonymous person called a local police department and said that a little child was kept under inhuman conditions in an apartment building in Chita’s Sovetskaya Street.

“When we entered the apartment, we thought that we found ourselves on a landfill. The stench was unbearable. The child was living under insanitary conditions. There were many animals in the apartment – cats and dogs – and it seemed that the girl had been raised by those animals,” a police officer said.

The girl was living in a three-room apartment with her father, grandmother and grandfather. There was no water and heat supply, no gas and no canalization in the apartment. When the girl saw the police officers, she attacked them like a little dog.

It later became known that the girl’s grandfather and grandmother were mentally unbalanced secluded individuals. Their neighbors noticed that the child hardly ever appeared outside, although they would walk the dogs out twice or three times a day.

The girl, named only as Natasha, now lives in the local rehabilitation center. Medics said that they did not find any sharp mental abnormalities in her development. However, when tutors enter her room, the little girl runs to the door and barks at it. She gazes at everything outside and starts at any noise. Natasha does not use a spoon or a fork when she eats – the girl simply laps her food up from a plate.

“She plays with other children here now, although she hardly ever speaks. She will have to be examined for we believe that she might be mute. She lags behind other children in her physical development too,” an employee of the rehabilitation center said.