Forbidden fruit is always sweet. Modern science supports the saying entirely if it goes about sex. This saying originates from religion after the church turned against sex in the 13th century. The undivided rule of free love, which humans inherited from the ancient world, was replaced with Puritanism in Europe within one century only. Scientists believe that the popes and their priesthood were struggling against sex and love between a man and a woman because they saw it as the main obstacle on the way for their reign. 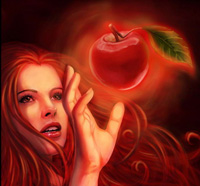 The church prohibitions still exist in modern-day Western culture. The Catholic Church resorted to confessions, denunciations and public executions to make husbands and wives love each only once a week. The more seldom – the better: no pleasure involved, it was only procreation that mattered.

As a result, the pleasurable activities in bed were strictly banned during church holidays, fasting days, on Sundays, etc. They paid special attention to banning sex during menstruation because a woman is physically incapable of becoming pregnant during such days.

Having sex once a week soon became the norm of family life in Germanic countries and then in the United States of America. This norm is still practiced today.

Sexual positions make another example of forbidden fruit. The church was extremely inventive in punishing those who liked doggy-style positions. This particular position is still considered humiliating to women in many countries. This seems to be absolutely absurd if two people having sex do it by mutual consent in a passionate attempt to please each other to the utmost.

In God We Trust, so to speak.