The affair between Hollywood star Mel Gibson and Russian pianist Oksana Grigorieva is no longer a secret. The famous actor and film director unveiled his lover to the general public as he appeared at the premiere of “X-Men Origins: Wolverine.” Moreover, it has recently transpired that Oksana was four months pregnant with Mr. Gibson’s child. His family is currently concerned about their own inheritance, which they receive after their famous father. 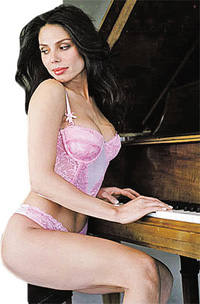 Oksana Grigorieva’s mother, Lyudmila Chernukha, is certain that her daughter did not destroy Gibson’s previous marriage.

“He broke up with his wife three years ago, so any talks about Oksana destroying their marriage is rubbish. Mel has not been living with his wife for a very long time, so it is absolutely natural that he would sooner or later meet another woman. It just happened that it was Oksana whom he met,” the woman said.

Oksana’s parents – both of them pensioners - live in the Moscow region. They used to work as teachers of music. This is where Oksana developed her own passion for music. She started playing piano when she was a three-year-old girl. Lyudmila said that it was music that made her daughter and Mel Gibson meet. Mr. Gibson’s company invited Oksana to write a track for Gibson’s new film. The two started dating each other when the actor was no longer living with his wife, in 2006.

Oksana’s parents are being cautious about their daughter’s possible pregnancy. Oksana Grigorieva already has a son from her previous marriage to Timothy Dalton (he is best known for portraying the role of James Bond). The 12-year-old boy, Alexander, lives with his mother in California.

“We call her very often, and she often says that she misses Russia, her motherland,” Lyudmila said.

Oksana Grigorieva was married three times before she met Gibson. Her first marriage took place when she was 19. Her husband was a student at the Conservatory of Kazan. The marriage did not last long, and Oksana moved to Britain. Afterwards, she married British graphic designer Nicholas Rowland, who was 19 years her senior (she was 22). Her third husband was Timothy Dalton, whom she met in 1993.