Naomi Campbell has become a frequent guest to Moscow after she developed a close relationship with Russian oligarch Vladislav Doronin. In the beginning of May, the couple enjoyed each other on Spain’s iconic Ibiza. 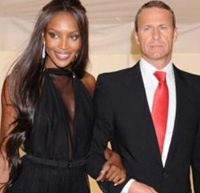 “Naomi and Vladislav dine either at Pushkin or at Bolshoi restaurants – they are very expensive restaurants in Moscow. Vlad always looks like a very serious man. He is always up to every move. Naomi is his antipode – she always like to have fun,” a person close to the oligarch told The Komsomolskaya Pravda newspaper on conditions of anonymity.

The Yudashkins left after a while, and Naomi offered others to join her and Vlad for a night of dancing. She said that there was a very good night club in Moscow which she liked a lot. The guests were very surprised when their limousines stopped near the doors of a relatively inexpensive Propaganda Night Club. The cub is known for its Sunday gay parties. Moscow gays were shocked to see Black Panther on the dance floor.

After a while, Doronin told Naomi that they had to leave. The supermodel did not argue: she grabbed her Chanel purse and off she went.

Naomi plans to have great fun in Moscow on May 22 when she turns 39. Rumor has it that the oligarch plans to give her a luxury present for her birthday. Campbell is known for her passion to rare diamonds.

They say that the couple does not plan a wedding: Doronin has not divorced his wife yet.