Russian Prime Minister Vladimir Putin made a public presentation of his new Niva vehicle, which he bought about a month ago. The car was unveiled to reporters near Putin’s residence in the city of Sochi in Russia’s south, where Putin conducted negotiations with the prime minister of Turkey. 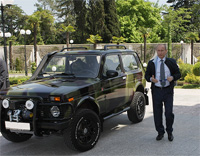 Putin told reporters that he was enjoying driving his new car, although he only traveled about 300 meters, RIA Novosti reports. Putin did not specify the price that he paid for the SUV.

Putin said that he liked the new wheels of the car, its soft suspension and the powerful engine. The prime minister also said that his car had a special specification, although it was already available at the manufacturing company (Russia’s AvtoVAZ).

“You’d better step aside, guys, it’s a serious car,” Putin warned the photographers, who were taking pictures of the car.

Several journalists had the privilege of driving Putin’s SUV. One of them took a ride around Putin’s residence and acknowledged that the driving was really enjoyable.

A female correspondent of RIA Novosti news agency said that it would be a very good car for a blonde.

A journalist from Turkey was the third to drive Putin’s car.

“Is it really Niva?” he asked Putin after the ride.

“It surely is,” Putin responded.

The journalist wondered if these cars would be available in Turkey.

“This car can be available in many countries of the world. This is a best-seller of AvtoVAZ,” Putin said.

Italian Prime Minister Silvio Berlusconi, who visited Sochi on Saturday, did not drive the car.

“He didn’t drive it, because the car arrived today. If they had delivered it yesterday, me and Silvio would have obviously taken a ride,” Putin said.