Anna Kournikova swaps her bikinis for Boys and Girls of America

Anna Kournikova decided to change the image of a sexy tennis star. She now tries to popularize sports among children. Kournikova finished her tennis career in 2003 and entirely dedicated herself to advertising luxury goods and modeling. Nowadays, the 27-year-old athlete works for Boys and Girls Club of America and Cartoon Network TV Channel, Itar-Tass news agency reports. 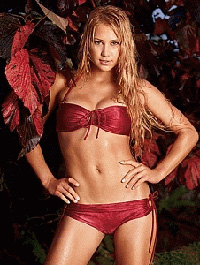 Anna Kournikova swaps her bikinis for Boys and Girls of America

The tennis diva, who used to be referred to as one of the strongest tennis players in the world, has made a very unusual step in her career. Many of Anna’s fans said that they were used to enjoying her photographs on the covers of such magazines as FHM and Maxim and that they never expected such a sudden change. The athlete herself said that it took her quite a long time to make the decision.

Kournikova has already made a DVD for Atlanta-based Cartoon Network. The DVD will be distributed among all Boys and Girls Clubs in the United States. The goal of the campaign is to promote physical fitness among kids and distract young Americans from laziness. Anna now tries to have boys and girls involved in physical activities and healthy lifestyle.

Anna did not bid farewell to tennis. She continues to perform with World Tennis Team, which is a team of former tennis stars. She does modeling too: last year she took part in a bikini photo shoot for Maxim.

Kournikova said in an interview with The Associated Press that she missed the time, when she was the center of the media attention. However, she added, she is happy to be working with children.

"I started working with the Boys and Girls Club in 2004," she said. "The first couple of years I didn't want to do any publicity. I just wanted to learn about the organization and find out about what was going on. I went to the conferences and went to the conventions unannounced and just sat in the back and listened,” she said.

"People can tell if you're being sincere, and I think that has helped me in the last few years. I think people have seen that I am sincere about it and I know what I'm talking about."

Anna found the proof during her recent appearance on Rachel Ray's talk show.

"There were only women in the audience and I'm sure they were like 'Here's this blonde we used to see in a bikini,"' Kournikova said. "Once we started talking, it was a great feeling and the women were really responding and all nodding and agreeing with the things we were discussing about the kids.

"That was very satisfying to me, to see that I can make a difference."