Natalia Zarubina of Russia managed to return her daughter from a Portuguese couple in a court case. Alexandra, a 6-year old girl, who became the center of a long dispute, was delivered to her mother on May 18. Oleg Sotnikov, the vice-consul of Russia, was present at the delivery procedure. 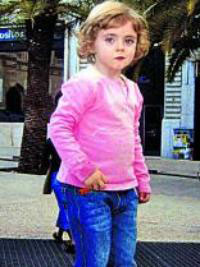 Natalia and Alexandra were taken to the Russian Embassy in Portugal and on Wednesday they are going to come back home to Russia.

This legal case started in June of 2007. A court of the town of Barcelos originally ordered to leave the child with the Portuguese foster parents.

Later the girl’s mother managed to persuade the court to take her side. Appeals by the Portuguese foster parents reached the constitutional court but were rejected.

Now nothing prevents Natalia Zarubins and her daughter from returning home, ITAR-TASS reports.

Alexandra has never been to Russia before and this will be her first acquaintance with the country Russia. She was born in Portugal in April, 2003. Her mother, Natalia, was in the state of civil marriage with Georgi Tsiklauri, a citizen of Ukraine, and both of them resided in Portugal. Soon the couple broke up and Natalia had to rent an apartment in Braga living from hand to mouth.

Natalia’s Portuguese friends, Joao Pinheiro and Florinda Vieira from the small town of Barcelos located 30 km from Braga, were helping Natalia looking after her daughter while she was away working.

In May of 2007 the Portuguese authorities found out that Natalia had been living in Portugal illegally and decided to deport the woman and her daughter from the country.

Joao and Florinda demanded the girl should be left with them and filed a suit against Natalia. The Portuguese court was on their side. The court’s verdict was treated in Portugal as a shock. Mass media quoted statements by Joao and Florinda who said that Alexandra would have to face an absolutely different life in Russia.

Meanwhile, Natalia Zarubina’s daughter has a grandfather and a grandmother who own a two-storied house in the Yaroslavl region.

"They are waiting for us and will meet us at the airport. I miss them so much too and I always wanted to return home, but thought that I would manage to make money here,” Natalia says.