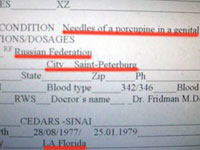 Staying in Florida on vacation, two Russians from Saint Petersburg decided to check whether they are able to circumvent such an unusual law or not.

Consequences appeared to be very sad. The poor fellows had to take needles from their genitals and treat inflammation for several months.

Having arrived in the USA, the Russians were given the book about the craziest American laws. For example, in Colombia sex - other than in a missionary position - is forbidden; in Kentucky it is forbidden to bring a lion to a movie theater; in Florida it is strictly forbidden to have sex with porcupines!

As it is known, forbidden fruit is always sweet, especially for Russians.

Doctors at Cedars-Sinai Medical Center made the following diagnosis: 'needles of a porcupine in genitals'.

At first 32-year-old Anton and 30-year-old Eugenie had a good laugh at the senseless law written by local authorities. And then, after helping themselves with whisky, they decided to break this funny law.

“We came here to the USA to have fun!” said Anton and the two friends started their searches for the so called American "hedgehog". It took them less than an hour to find the animal.

With victorious shouts the drunken friends dropped their pants and started making unambiguous movements with their hips. Having sobered up the following morning the friends realized that they need medical help. So the animal-lovers had to go from the airport straight to hospital, Life.Ru reports.

Doctors of well-known medical center Cedars-Sinai diagnosed the case as ‘needles of a porcupine in genitals’.

“The most positive thing about the situation is that the Russian tourists did not have to stand trial in Florida. They left the state just in time,” said the doctors at the medical center.

Now American laws do not seem so funny to Anton and Eugenie. After returning to Moscow they had to get acquainted with Russian urologists: porcupine needles caused very strong inflammation.