“At age 26 I could hardly fasten the top button of the largest size of jeans that were found in a clothing store for big men. The size was 72. At age 27 I weighed 186 kilos being 192 cm tall,” - Alexey Panin said. 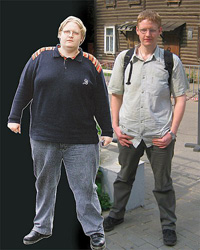 The man did not have any complexes. He had a good job, friends, a wife and two children. But he could not live on being a burden to himself. It was extremely hard for him to go downstairs, for example. He suffered from short breath and palpitation. He had to travel to Moscow to find fitting garments and trousers resembling airplane covers.

Alexey made a wish on New Year’s night in 2007: he wished to lose weight. Soon his life began to change. In Moscow, psychologists told him that the power of word could exert a striking influence of people’s lives.

Friends do not recognize him anymore, but women in the streets look at him intently or even lovingly.

Alexey wants no buns anymore. Now he weighs 101 kilograms. The man lost 85 kilograms within two years! His goal is to reach the weight of 92 kilograms.

This is an example of a daily menu from Alexey:

Afternoon snack: a glass of yoghurt drink, a banana.