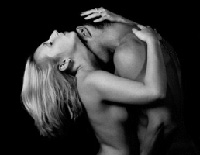 I have conducted a social study in a mini format. I have questioned several tens of people in an equal gender relationship.

Women think during sex about the following:

“It’s about time to whitewash the ceiling and make a general refurbishment at last!”

“We must buy a jacket for our baby, the one we bought last year won’t fit now.”

“We haven’t traveled to anywhere for so long, and now there are tourist vouchers on last-minute sale.”

“Where could I get a new job, here I’ll be fired soon, it seems.”

“When is he ever going to finish the job? I gotta pee now (supper is growing cold, I must check my mail)”.

She also thinks that she wastes her time with him, because he will never receive a divorce – his wife is deadly ill and they have three kids. She is afraid of becoming pregnant or, vice versa, thinks only about the fact that today is a very good day for conception. At the same time, she tries to imagine how she could hint that she is not an oil well and he is not a boring machine, and that a prelude in sex, unlike in an opera, must be longer than the main action. Modern industry began to produce lubricants a long time ago. A man has saliva in his mouth completely free of charge in the long run.

Sometimes a woman thinks about nothing during a sexual intercourse. She does may think about another partner at times. It is so easy – to close eyes and imagine that you are making love to someone handsome, who is always ready, always tender, always careful. He will caress you before and after and will bring the much talked-about coffee into the much talked-about bed. But with this lover… at first, it takes much time to fire him up; after sex, he falls asleep at once at best. At worst he will tell you about his problems and will ask to lend him some money until he receives his salary.

There is only a small percentage of women who do not think about anything during sex. Because they have no sex. Therefore, they think about sex all the time. Of course, if their heads are not occupied with thoughts about late credit payments.

British researchers have recently conducted a study which said that 42 percent of British women think about sex when they take a metro ride. Russian women think about sex in the metro three times more seldom, The Komsomolskaya Pravda newspaper found out. The Russians have no time for erotic fantasies in the metro – they mostly read there. But at work… As soon as she takes a shower, downloads heaps of spam during morning coffee and comes to work, she begins to think about sex. For instance, she looks at her boss, she fixes her eyes on him and imagines improper scenes. Even a shout “Why have you ruined the project?” can’t immediately reach out to her preoccupied mind.

Men gave the following answers to the question “What do you think about during sex?”

“I think about nothing, this is rubbish!”

“How can I come home in time for supper? Ha-ha-ha”

“I think about sex during sex”

“Why did I take my socks off?”

“What a funny face expression she makes! She look like a fainted ground squirrel.”

“What are you talking about? I’m 40 years old, I got fired from my job, and you ask me that? Got nothing more to ask? By the way, you look pretty”.

We must admit, men make jokes in replies mostly – they think about sex all the time. But their faces are all sad. After a third glass of wine, they start to deny sex at all, because they are tired, because tomorrow is uncertain and his wife asks for a new jacket for their son, while his lover asks to divorce his wife.

I do not know if we should trust such a survey –the data are, generally speaking, statistically unreliable.

Maybe, readers would like to know what the author of this article thinks about during sex. I will reveal a secret. Firstly, the author doesn’t have sex – the author makes love. Secondly, when he made love last time, half a minute before his brain switched off and he turned to an animal, he had thought: “I shouldn’t scream aloud - our guests are sleeping in another room”.