A 65-year-old Australian citizen Geoff Ostling leaves his tattoo-covered skin to the National Gallery of Australia in Canberra. 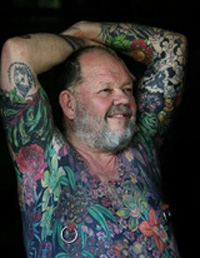 There is nothing strange in the appearance of Geoff Ostling: he is an ordinary paunchy man with a beard. But things change when Geoff takes off his clothes: his whole body is one big picture, a work of tattoo art. Ninety percent of his body is covered with motley tattoos.

The first indelible picture on the body of the Australian appeared about 20 years ago, when Geoff worked as a school teacher. He met a director of a large company then, who was covered with tattoos of Greek and Roman mythology scenes from head to foot. Ostling liked the look so much that he decided to do the same with his own body. Geoff chose another theme certainly – flowers. He decided to have the most beautiful flowers of Sydney ’s Royal Botanic Gardens tattooed on his body.

The job was entrusted to a well-known tattoo artist nicknamed Ex de Mercier. The artist had been working on Geoff’s body for more than 15 years. When he finished his work, his client turned into a masterpiece. Geoff enjoyed the process so much that he put up “a botanic garden” even on his genitals.

The former teacher often thought of growing old. He concluded that he would like to save his beautiful tattoos for other generations and have his name recorded in the history of the global tattoo culture this way.

According to Geoff Ostling’s will, nothing will be lost after his death, an Australian edition of The Daily Telegraph reports. Experienced taxidermists will separate the skin from his body and the tattoos masterpiece will become an exhibit of a museum in the Australian capital, Canberra.