Men suffering from sperm intoxication grow hair on their palms

It is an open secret that men’s behavior depends on their sex life. Testicles produce sperm 24/7 non-stop. This sperm ‘workshop’ needs to send it products away all the time. If a man does not find a way to relieve himself of his own sperm, he may have severe problems. The goal of every sperm cell is to either reach an egg cell or leave the ‘production department.’ If men’s cells do not find a way out, they destroy themselves. 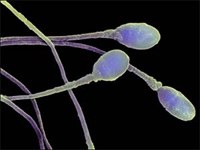 Men suffering from sperm intoxication grow hair on their palms

Some people say that sperm cells may even penetrate into blood if they stay inside too long. Rumor has it that millions of sperm cells may disrupt the work of the immune system which becomes unable to cope with the attack of so many cells. In this case men can become too aggressive and too active in their every-day behavior. If a man neither masturbates nor has regular sex, he may have pimples too.

The above-mentioned theories are not scientific, of course. It would be better to describe them as urban legends.

Sperm can not be poisonous. However, men do may experience certain problems if their sex lives leave much to be desired. In this case a man can have his sperm analyzed.

A spermogram identifies the physical and microscopic qualities of sperm cells. A more advanced MAR test defines the percentage of the cells that are incapable of taking part in the insemination process. A biochemical analysis of sperm provides information about the condition of the prostate gland, the accessory glands of men’s reproductive system and the hormonal condition of the body in general.

A single consultation with an urologist, andrologist or a psychiatrist may solve everything at once because there is obviously no such diagnosis as sperm intoxication.