According to experts’ estimate, there are over five million drug addicts in Russia. Up to 70,000 people die over drug overdose in Russia every year. Drug addicts may often destroy the lives of other people too. The police of Russia’s Tyumen region have recently arrested a local resident, who organized a drug den in his own apartment. The detainee said that he was making and using Desomorphine out of curiosity. 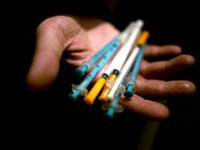 The rumors about the apartment of ill reputation in the city of Tyumen quickly attracted the attention of the local police. The flat belonged to a young man, a philologist, a graduate of the Tyumen State University. Many of his articles were published in local newspapers and magazines. It just so happened that the journalist decided to make Desomorphine, a narcotic substance, at home. The man found the recipe on the Internet, purchased all the necessary ingredients and organized a simple laboratory in his kitchen.

He found it boring to get high alone, so the man asked his friends to join him. He synthesized the drug from medications that are available in any drug store. When the police rang the man’s doorbell, all the people in the flat were found in a state of drug intoxication. All of them had taken a dose of Desomorphine, which is known in Russia as ‘the crocodile.’

The young man did not deny anything and said that he simply wanted to find out if it was possible to make ‘the crocodile’ domestically. He tried it once and could not stop afterwards.

A similar drug den was found in Russia’s Republic of Khakasia. A local resident was making Desomorphine with his own hands from pain-killing medications.

Desomorphine is a cheap, but a very dangerous drug. It is as strong as heroine and it lasts for more than four hours. A person using Desomorphine becomes a drug addict within a very short period of time, after two or three doses, as a rule.

A Desomorphine-addicted individual experiences severe problems with their immune system; the drug deteriorates the liver and the cardiovascular system. A person, who uses Desomorphine on a regular basis, dies within two years.

Desomorphine was invented in the United States in 1933. It was used in Switzerland under the brand name Permonid and was described as having a fast onset and a short duration of action, with relatively little nausea or respiratory depression compared to equivalent doses of morphine.