Berlin’s renowned Treptower Park is located in the eastern part of the German capital. This park has a special significance for Russians. The Soviet Warrior Monument was unveiled in the park in 1949. The monument itself is an outstanding work of art, and one of the biggest grave monuments that have ever been built in the history of mankind. 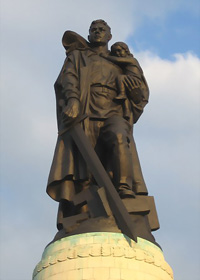 The above-mentioned park in Berlin appeared in 1876. Hundreds of tourists visit the park on a regular basis to enjoy its views and the sight of the renowned burial mound with the gigantic bronze soldier on top. The Soviet warrior, the liberator, who slashes fascist swastika with his sword, is ready to sacrifice his life to the sake of the child of the enemy state.

The colossal 13-meter high statue of the Soviet soldier with the rescued German girl in his arms was designed by architect Yevgeny Vuchetich.

One of the legends, which surround the massive monument, says that it was originally supposed to make the statue of Comrade Stalin instead of the Soviet soldier. In addition, it is not clear if the bronze man, who now appears to be standing on the pedestal, ever existed in real life. It is not ruled out that the architect simply created a perfect image of the Soviet soldier.

One of the theories says that the monument represents the image of soldier Nikolai Masalov. Masalov indeed saved a German girl during the siege of the capital of the Third Reich in the spring of 1945. The event happened on April 30. Here is what Marshall Chuikov wrote about it:

“There were about 50 minutes left before the attack. It was quiet, absolutely quiet. The sound of a crying child broke the silence all of a sudden. It seemed that the child was crying somewhere under the ground. Masalov said that he probably knew where the child was hiding. “Allow me to rescue the child, I know where he is,” he said.

“It was extremely difficult to crawl to the bridge. Bullets were flying everywhere, land mines were exploding here and there. Sergeant Masalov was crawling forward pinning himself against the asphalt road.

He heard the child’s voice again. The girl was calling for her mother. The soldier stood out and crossed the barrier of the channel. Several minutes later everyone heard Masalov saying: “Attention, I am with a child here. Cover me up!”

Hundreds of shells and mines provided the covering fire for the Soviet warrior who was carrying the little girl out from the zone of death. The girl’s mother most likely attempted to escape from Tiergarten, but SS officers started shooting her in the back. The woman hid herself underneath the bridge to rescue her daughter and died there soon. Masalov handed the girl to nurses and was ready to start the attack.”

The monument to the Soviet Warrior was made in Leningrad and delivered to Berlin by boat.

A special agreement signed between the USSR and the Federal Republic of Germany in 1990 said that Germany would take care of monuments and burial grounds of Soviet warriors on its territory. The monument was carefully disassembled for restoration works in the autumn of 2003 and was retrieved in the spring of 2004.