A skinny woman sparked a controversy in Australia as she became a finalist of Miss Australia beauty pageant. She seemed too exhausted and too thin to doctors and dietitians: specialists said that the woman’s thinness was dangerous to her own health and could set a wrong example to young Australian females. 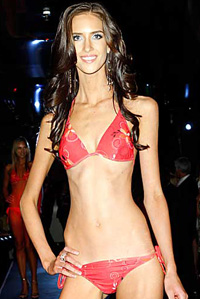 Stephanie Naumoska, a 19-year-old model from Sydney, became one of the 32 finalists of Miss Australia beauty contest. Naumoska came second, which triggered a vivid discussion in the Australian press the next day. Many local newspapers published pictures of the anorexic model posing in a red bikini.

Many dietitians said that Naumoska’s body weight index made up 15.1, whereas 18 is considered the norm, Reuters reports. Stephanie Naumoska is 180 centimeters tall, and she weighs 49 kilos. Australian dietitian Melanie McGrice told reporters that she would demand a full medical examination of the woman’s state of health to find out whether Naumoska suffered from anorexia.

Deborah Miller, the director of the beauty contest, stated that Naumoska had the Macedonian type of constitution. They are skinny and flexible just like many Asian females are short in height, Miller said.

Official spokespeople for the Medical Association of Australia said that Naumoska could become a role model to many young Australian females who would think that being skinny was normal,

Stephanie Naumoska was beat by Rachael Finch: she will thus represent Australia at Miss Universe beauty pageant in August of this year.

Anorexia has become one of the most talked-about subjects in the beauty industry lately. The issue was highlighted in August 2006 when a 22-year-old model from Latin America died of exhaustion. A well-known Brazilian model – Ana Carolina Reston – died the same year in November. She was 174 cm tall and weighed only 40 kilos. Several other models died in different countries of the world afterwards.