Putin too sober for 'Kiss Me I'm Drunk' campaign in Amsterdam

Images of world’s leading politicians were used in printing a series of advertising posters, which appeared in the streets of Amsterdam on the threshold of the birthday of the Queen of the Netherlands. 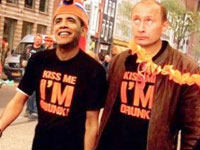 Putin too sober for 'Kiss Me I'm Drunk' campaign in Amsterdam

Posters and postcards depict US Secretary of State Hillary Clinton wearing a swimsuit and an orange wig and saying: “Up for a party?” French President Nicolas Sarkozy appears hugging his Italian counterpart Silvio Berlusconi. The two politicians have orange boas around their necks: “Let’s go party!” the slogan on the poster says.

Another poster with US President Barack Obama and Russian Prime Minister Vladimir Putin was supposed to be printed too. Obama and Putin were depicted wearing T-shirts that say “Kiss me, I’m drunk.” The poster did not see the light, although there were no official complaints received, Le Monde wrote.

Spokespeople for Amsterdam Partners (the agency which printed the posters) said that they decided not to print the posters with Putin and Obama after they had received a piece of advice from the Russian press.

“Vladimir Putin never drinks and his image with such a slogan “Kiss me, I’m drunk” can trigger a negative reaction in Russia. We do not want to create any problems in the relations between Amsterdam and Moscow,” the newspaper quoted a spokesperson of the agency as saying.

At the same time, the French Embassy in Amsterdam asked to remove posters with French President Sarkozy and Italian Prime Minister Silvio Berlusconi. Officials at the French Embassy believe that the poster causes damage to the dignity of the French president, De Telegraaf wrote.

Amsterdam Partners said that it was not going to remove the posters from the streets of Amsterdam. France is the only country that has shown a reaction to the funny campaign so far; no other complaints have been received yet, RIA Novosti reports.

The posters were printed within the scope of the advertising campaign to attract foreign tourists to Amsterdam for the celebrations of Queen Juliana of the Netherlands’ birthday, which the nation of tulips will mark April 30. This date is considered the day of the national unity in the country. Juliana’s daughter, Beatrix, currently takes the throne of the Netherlands.