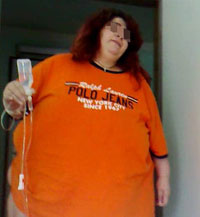 The woman’s baby is developing normally; she is due in April. The pregnancy for the 34-year-old woman weighing 250 kilos became a shocking surprise. The woman could not conceive a baby for 16 years. Even when Nonna was told that she was pregnant, she was recommended to have an abortion. Doctors said that child-labor would be too risky for her taking account of her weight and hormonal disorders. The woman made a decision to give life to a baby at all costs.

Nonna still can not believe that she is pregnant. She was waiting for it to happen for 16 years and did not even have a hope to become a mother some day. She divorced with her husband 18 months ago: the man could not keep on living with a woman who could not give birth to his children. The family had everything that they needed, but the absence of a baby could not make a strong family.

“I didn’t realize at first that I was pregnant. I always felt very uncomfortable because of the hormonal disorder, so I didn’t pay any attention to the changes that were happening to me. Who would have thought that it could happen after 16 years!” the woman said.

She learned about her pregnancy by accident. Nonna visited her friends one day, the women started smoking, and Nonna suddenly became sick.

“I’ve never had such a reaction to cigarette smoke. My friends told me at once that I was probably pregnant. We even had a bet for a box of champagne,” Nonna said.

The 34-year-old woman, a manager at a Moscow-based tobacco company, started visiting doctors on a daily basis afterwards. All the doctors, who examined the woman, told her that she would have to make an abortion to save her own life. Nonna had a serious hormonal disorder; her heart and kidneys were not functioning properly either.

“I decided that I would give birth to a healthy child. I will be bearing it as long as my body lets me,” she said.

Moscow’s leading gynecologists take care of the unique patient 24/7. All of them say that it is an outstanding incident in modern medicine. A woman can not be impregnated with such a serious hormonal disorder, Life.ru reports.

The Muscovite will probably make an entry into the Guinness Book of World Records. A woman with a record weight will become a mother – this is considered nonsensical in medicine.

“I am very tired from the attention that I have been getting recently. I want it all to end as soon as possible,” Nonna said.