Doctors from the Russian city of Izhevsk found a germinated branch of a fir-tree in the lungs of a man. Artyom Sidorenko, a 28-year-old man, was originally believed to be a cancer patient. He had seizures and was coughing up blood, a doctor said. 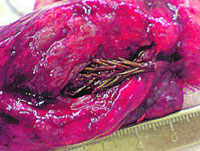 “We found a tumor as a result of the X-ray examination and decided to operate him,” Doctor Vladimir Kamashev said.

The surgeon was certain that the man had a cancerous tumor in his chest. However, he decided to analyze a tiny piece of the man’s lung before removing a half of the organ. He made a cut and saw a small green branch of a fir tree, the Komsomolskaya Pravda reports.

“At first I thought that I was having an illusion. I asked my assistant to check it out and he confirmed it too! There was a fir tree in his lung! We removed the branch that was five centimeters long,” the surgeon said.

“I was told that I was coughing up blood because the fir tree needles were touching capillary vessels. It was very painful, but I did not feel a foreign body in my chest,” the man said after the surgery.

Doctors presume that the man somehow inhaled a fir tree bud that germinated inside his lungs.