Aleksei Kuksa, a 30-year-old man, gave himself up to the police eight years after he had brutally murdered a priest. 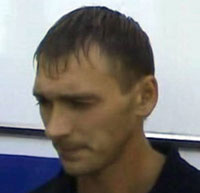 “I can’t live with this sin anymore. It was me who stabbed Father Sergey. I see him in my dreams every night. Put me on trial!” the man said.

The crime took place in October 2001 in the town of Kamyshin, the Volgograd region of Russia. The 36-year-old priest of a local church was found dead. There were 12 stab wounds found on his body.

The priest’s mother still shudders as she remembers the nightmare that she had to survive.

“My God, I could feel that there was something terrible coming over. An icon fell off the wall in my house several days before Sergey died. I told my son that it was a bad omen. He sanctified the house, by my heart was still aching,” the woman said.

The woman received a phone call from parishioners that day: they told her that the father had not come for the service. It was very untypical of the priest who had been working in the church without any weekends or holidays for 12 years in a row. Sergey was found dead lying in a pool of blood in his apartment.

Father Sergey used to be a marine and a doctor. He decided to devote his entire life to religion when he came to realize the meaning of faith. He built his church in the town together with other parishioners.

The police were at a loss: they could not find any evidence that could help them solve the crime.

“Sergey Vitukhin’s murder case would be suspended and resumed several times. We resumed it again after one of the murderers confessed to his crime,” a senior investigator of the local police department, Sergey Naumov said.

“He worked at the church for a while. It was rumored that he and his friend were drug addicts,” Sergey Vitukhin’s mother said. “My son wanted to heal them with faith,” she added.

The two friends confessed to Father Sergey of their sins and told him once that they were sexually attracted to other men. The priest did not even think to unveil the mystery of their confessions, but the men thought that he could let other people in the town know about their unconventional sexual orientation. Kuksa later said that they had killed the priest over the fear of being exposed. Aleksei Kuksa and his friend came to visit the priest at his home one day and slaughtered him, Life.ru reports.

Aleksei Kuksa and his associate in crime, Denis Neokhotnik, left the town some time later. Aleksei developed a relationship with a woman, they got married and had a baby. However, the murder that he had committed could not let him lead a normal life. He would see the priest in his dreams almost every night. Aleksei eventually decided to repent. He was crying when he was telling his story to the police.

Aleksei Kuksa will face the trial soon. His associate is still wanted.