Miss Universe has great fun with US soldiers at Guantanamo Bay

The message, which Miss Universe Dayana Mendoza posted on her blog to tell about her wonderful stay at the notorious Guantanamo prison, raised eyebrows with everyone who visited the blog. The organizers of the renowned beauty pageant were forced to bring their apologies to the general public. The post has been removed from the blog, whereas the incident was described as misunderstanding. 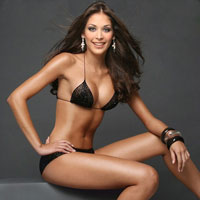 Miss Universe has great fun with US soldiers at Guantanamo Bay

Venezuela ’s 22-year-old beauty queen posted her delightful impressions of the prison which was involved in a number of major international scandals. The light-minded beauty wrote that she was wandering along the coast with the guys from the army base. They showed her how they worked at the base and then invited Miss Universe and Miss USA, who also arrived at Guantanamo Bay, to admire the bay. Dayana Mendoza wrote that she had had a wonderful time with the guys at Guantanamo.

Miss Universe wrote about the prison too. She saw the chambers where prisoners took showers, watched movies and read books. She said that the prison was “a very interesting place.”

On Wednesday, the scandalous post was replaced with a message from Paula Shugart, the president of Miss Universe beauty pageant. She wrote that Miss Universe and Miss USA Crystle Stewart made a scheduled visit to Guantanamo to raise the morale of US soldiers on the base.

Mendoza’s blog entry caused a storm of indignation in Venezuela. Many Venezuelans believe that Mendoza’s silly remarks about the prison, where 240 terrorist suspects are still kept, have caused damage to the nation’s image.

It was not the first time when beauty queens visited the US army base at Guantanamo Bay. Victoria’s Secret models visited the base in 2002 to help US soldiers get into the spirit too.

Dayana beat 27 other candidates to win Miss Venezuela 2007 on September 13, 2007, and became only the second woman representing the Amazonas state to win (the first being Carolina Izsak in 1991). She was crowned Miss Universe 2008 at the pageant in the Crown Convention Center, Nha Trang, Vietnam on July 13, 2008. Mendoza became the first winner of the pageant from Venezuela since Miss Universe 1996's winner Alicia Machado, thus making her the first Venezuelan Miss Universe in the 21st century.

Miss Universe 2007 Riyo Mori crowned her with a tiara worth 120,000 U.S. dollars. Her prize package includes cash, a year contract promoting Miss Universe, world travel, a rent-free, prestigious New York City flat, luxury apartment and a gift bag stuffed with designer shoes, dresses and beauty products, a $100,000 stipend for a 2-year course at the New York Film Academy and free access to famous fashion houses and beauty parlors. Mendoza will spend her year-long reign traveling the world to lecture on humanitarian issues and to promote education regarding HIV/AIDS.