Aborigines give Russian names to their children - Sasha, Masha and Tanya

The aborigines of New Zealand have got into the spirit of Orthodox Christianity. The Maori people convert to Orthodoxy and give Russian names to their children. 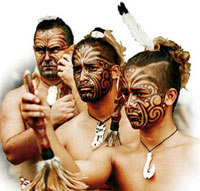 Aborigines give Russian names to their children - Sasha, Masha and Tanya

The development of the Orthodox religion in New Zealand became possible owing to the missionary activity of Russian emigrants in the country. Lyudmila Yakovleva, a student from the city of Yekaterinburg, married a foreign national and became Lyudmila Lauri. She subsequently moved to live in the southern hemisphere of the planet.

The woman wrote in an email to her relatives in Yekaterinburg that Russian settlers in New Zealand keep their traditions in every home. “Each Orthodox church is a piece of Russia, a piece of old Russia here. They hold services in crowded temples,” the woman wrote in one of her email.

“Many aborigines in New Zealand observe customs and traditions of the Russian nationals and decide to convert to Orthodoxy. They baptize their children and give Russian names to them – Sasha, Masha, Tanya,” the woman wrote.