A celebrity news website TMZ.com has recently posted an explicit photograph of the youngest US Congressman, Aaron Schock, who is only 27 years old. 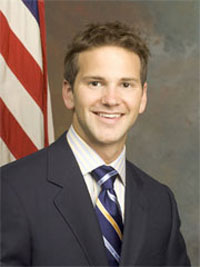 The photo (click here to see the picture) shows Schock, sporting only a pair of red swim shorts, sitting in a relaxing position on a sun bed by the pool. Everyone can enjoy the view of Aaron Schock’s six-pack torso. An unidentified woman, whose face was blurred, is depicted standing behind the congressman. The photo was taken in 2007 and was not photoshopped, the website said.

Aaron Schock was elected to the House of Representatives in November 2008, representing the 18th district of Illinois. He has already won the reputation of the “hottest freshman” of the US Congress, The Huffington Post said.

TV host Howard Kurtz offered Schock to take off his jacket and roll up the sleeves to show everyone his muscles. Schock humbly declined the suggestion and said that he would like to talk more about politics rather than his abs.

US President Barack Obama was photographed topless in Hawaii at the end of December last year, which triggered vivid discussions in the media.

Aaron Schock is a Republican. The party is known for its conservative views. Therefore, experts believe, such explicit photographs, which may not seem to be explicit at all, may cause damage to Aaron Schock’s career in politics.