In the Russian town of Pavlov Posad , situated 25 miles from Moscow, people have to drink water with worms in it. 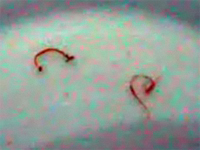 Even after repeated chlorination parasites did not die. Russian Agency for Health and Consumer Rights told reporters that the worm species were not known to science yet.

Worms appeared in tap water for the first time when several houses in one of the streets of the town had been cut from water supply for a couple of days.

“When the water started running again, it was very rusty. When it became a bit clearer I started to fill in the bath tub. I was about to have a bath when I noticed that something was swimming there. I had a closer look and found out that it was a gigantic red worm,” Irina, a woman living in one of the houses said.

Irina counted seven ugly worms in her bath. Their length was about 3 inches. She rushed to call the Health Inspection Service but they told her to call the Agency for Health and Consumer Rights.

Experts from the Agency for Health and Consumer Rights came in a couple of days. They put several worms in a test tube and took them away for examination.

“First they thought that these were bloodworms, but eventually they came to conclusion that the worms belonged to an unknown species. Nobody could even explain to us whether these worms were dangerous or not,” Irina said.

The worms which found themselves in the town’s water pipe system turned out to be very hardy. The water pipe services pumped out the water and chlorinated it, but it did not give any special result.

Residents of Pavlov Posad joke that their tap water can be easily used as fish food.

However, the situation is far from being comical. Irina and her husband have an eight-month-old daughter and they prefer not to risk bathing her in such water. And buying bottled water is very expensive.

There is no confirmed information about how many people are suffering from the same problem in Pavlov Posad.