The Vernal Equinox, or the Vernal Point, occurs on March 20, when the sun moves from the southern to the northern hemisphere. The Chinese celebrate the Day of Balancing Eggs today: eggs can stand on their ends during the equinox. 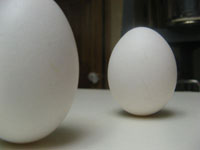 The Vernal Equinox marks the beginning of the astronomic spring, when days become longer, an official with the St. Petersburg-based Institute for Applied Astronomy said. Russia and many other countries will switch to daylight saving time, or summer time, like the Russians say, on March 29.

China celebrates the Vernal Equinox with the festival of balancing eggs. On this day one may easily make an egg stand vertically on its end, the Chinese believe.

Chinese scientists say that acceleration vectors of the Earth around its axis and around the Sun become perfectly balanced against each other on this day.

Other scientists say that four-day eggs are perfect for the trick of balance. One should whirl an egg a little first to make it stand vertically.

The Chinese say that those, who manage to make an egg stand on its end of the Vernal Equinox, will be very lucky during the whole year.

Their combination means that when the upper limb of Sun is on the visible horizon, its centre is 50 minutes of arc below the geometric horizon, which is the intersection with the celestial sphere of a horizontal plane through the eye of the observer. These cumulative effects make the day about 14 minutes longer than the night at the Equator and longer still towards the Poles. The real equality of day and night only happens in places far enough from the equator to have a seasonal difference in day length of at least 7 minutes, actually occurring a few days towards the winter side of each equinox.