Kiev Mayor Leonid Chernovetsky, who is known for his unusual behavior, made an original response to deputies of the Ukrainian parliament, who literally offered him to have his head examined. Chernovetsky decided that his physical condition was the best evidence to prove his psychic health. 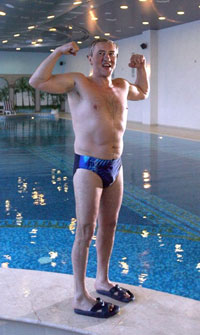 Chernovetsky attended Kiev’s Dynamo Stadium on Wednesday morning to run a 400-meter track, to make 15 pull-ups and swim in a swimming pool. When the mayor went out of the pool, he began to demonstrate his muscles to photographers.

“I want the whole Ukraine to know that I am physically and psychologically healthy,” Leonid Chernovetsky said wearing only his wet speedo in the locker room of the swimming pool. “I ran, did pull-ups and I swam to wash away the dirt from Ukraine – the dirt, which Ukrainian irresponsible politicians pour down on my motherland,” he added.

In the middle of his statement Chernovetsky paid attention to a TV-set that was showing a meeting of the Supreme Rada, the Ukrainian Parliament.

“Fascism threatens democracy in Ukraine. Just look at those people. They judge me today and want me to spend the rest of my life in an asylum,” the Kiev mayor said.

“Any political leader can be humiliated and even driven to suicide in Ukraine nowadays. It is impossible to stay next to mentally unbalanced individuals, not even for one day, one hour or one minute,” Chernovetsky said.

The mayor, 57, stressed out that he was almost 60, but he was staying in a perfect physical shape. He said that he was a candidate of sciences and a former vice principal of the Kiev State University.

He also told reporters that he would soon tell the world about what was happening with democracy in Ukraine.

The mayor of Kiev is known for his unusual statements and bizarre decisions. For example, he fired the director of the Kiev Zoo after he failed to find a female for a male elephant. The mayor said that he would take the animals under his control and set out a wish to congratulate them on various holidays.

The mayor is fond of singing. Last week, Chernovetsky released a CD of his best songs, which particularly include covers to popular Soviet songs of the 1980s.

The Ukrainian parliament offered Chernovetsky to undergo a mental examination after it transpired that he was supposedly a patient of a mental home in Israel.