No one knows why people bite their nails

Modern science does not have an answer to the question of what makes people bite their nails, although there is quite a number of theories to explain the mysterious phenomenon. 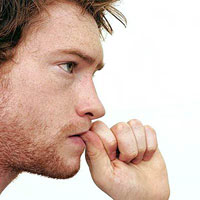 No one knows why people bite their nails

French researchers conducted an opinion poll to find out who bites their nails and in which situations. The research showed that the French mostly bite their nails because of their work. Over 26 percent of the polled said that they bite their nails when they think of something related to their jobs. Strangely enough, shopping is the second reason: this incident of nail biting probably symbolizes choice-making tortures. The thoughts about the economic situation and concerns over one’s parents and children come third.

Nail biting eventually leads to fissures that can serve as the gateway for infections, not to mention the immense amounts of microbes that can be found underneath the nail plates.

Nail extension can help some people solve their problem. Those who extend their nails say that it is very unpleasant to bite acryl.

One may also scratch a piece of soap – the taste of soap will easily kill the wish to bite nails. It is also possible to use special bitter-flavored nail varnishes instead of soap.

These methods may not work with people who bite their nails over psychological problems and anxiety. Such people will have to work to get rid of the source of anxiety.