The year 2009 will have three Fridays the 13th, which is yet another unpleasant record of the year that has been critical for so many people all over the globe. Friday the 13th can be found on 2009 calendars in February, March and November. 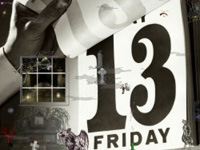 The last time, when three unlucky days occurred in one year, took place in 1998, which will always be remembered as the year of Russia’s default, and in 1987, known for its black Monday (October 19), when Dow Jones suffered the largest drop ever – 22.6 percent.

Analysts said that the economic collapse of 1987 had a mystical side to it – there were absolutely no reasons for the disaster to happen. The event cast doubts upon many landmark hypotheses that lay the foundation of economy as a science.

In general, the crucial eighties of the previous century set a record in terms of the number of Fridays the 13th. Three unlucky days occurred in 1981, 1984 and in 1987 each.

There was only one year with three Fridays the 13th during the 1970s – the year 1970. Those years were not distinctive for any major shocking events.

The total quantity of Fridays the 13th is more or less the same in each decade – about 17. There were 18 unlucky days during the 1980s.

A deeper analysis of 150 years shows that there is no connection between global catastrophes and the frequency at which Friday the 13th occurs.

Many people fear the day of Friday the 13th for no particular reason. In medicine, the fear is known as triskaidekaphobia. The people, who suffer from this phobia, believe that they will definitely have a misfortune on Friday the 13th. A research shows that every fourth European has a certain fear of Friday the 13th.

Another opinion poll showed that 13 percent of Americans were afraid to live on the 13th storey. Many hotels do not have the 13th storey at all for this reason: the 14th storey follows the 12th at once. No US airline has flights under the number 13. According to various estimates, each Friday the 13th causes almost a billion-dollar damage to the US economy every time it occurs, because people are afraid to do their businesses.

The symbolism of numbers says that the number 13 is the overbuilt number 12, which disrupts the harmony of the Universe. A day has 12 hours in it twice, there are 12 months in a year, thee are 12 Zodiac signs, there were 12 Apostles. However, there were 13 people sitting at table the day when Judah agreed to betray Jesus Christ for money. Twelve witches arrive for Sabbath with the 13th guest, Satan, joining them later.

At the same time, the number 13 is considered a lucky number in Judaism. Ancient Egyptians and the Maya Indians also associated this number with the mercifulness of their gods.

In general, any date is a highly conditional number, for it can be an absolutely different number on other calendars – on the Indian, the Hebrew, the Muslim, the Chinese, the Persian, the Lunar or the Julian calendars.

Every human being has 115-120 unlucky Fridays in a lifetime.

The signs on the reverse side of the US one dollar note include: 13 levels of the pyramid, 13 stars above the eagle’s head, 13 arrows in the eagle’s claws and 13 leaves on the olive branch.