Buddha, which is widely worshipped in Asia, was of direct relevance to Ukraine, the official publication of the country’s parliament, The Voice of Ukraine newspaper wrote. 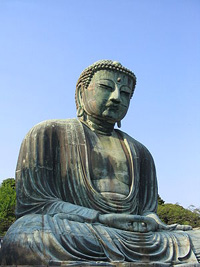 “It is quite possible that Buddha belonged to the Scythian nation of Budins that lived on the territory of Ancient Ukraine during the first or the second millennium B.C. The name of the nation is still preserved in the names of Ukraine’s contemporary settlements – Seredina-Buda, Buda, and some others,” the newspaper of Ukraine’s Supreme Rada wrote.

“Everything is clear from the ethnic point of view. Buddha was a Scythian Arian, a member of the Budin tribe. The descendants of the tribe still live in the Sumsky and the Chernigov region of Ukraine, as well as on the neighboring lands of Belarus and Russia,” the newspaper said.

Mr. Bebik published a number of his articles in the official newspaper of the Ukrainian Parliament before. He wrote his previous articles for the paper to “prove” the remarkable role of the Ukrainian civilization, which endowed the world with spiritual enlightenment, outstanding prophets, philosophers and leaders.

In 2008-2009, the Ukrainian professor shared his amazing observations of Ancient Egypt, Ancient Greece and the ethnic origin of Jesus Christ.

“The name of Egypt’s major temple, Het-ka-Ptah, sounds very much like Ukrainian words ‘hata’ and ‘ptaha’ (‘house’ and ‘bird’). The pictures on the Egyptian pyramids show that Egyptian queens were blonde women with blue eyes, just like many Ukrainian women. One should also pay attention to the fact that the trident, which is currently the minor national emblem of Ukraine, can often be seen there too,” the “scientist” wrote.

“We have already outlined the facts that placed in question the official, the church version of the ethnic origin and the Biblical dates of the life of Jesus Christ and the historical epoch, in which the basis of Christianity was formed. It looks like Christ actually lived 3,000 years before his canonical birth and spoke the Coptic language, which is a close language to the ancestors of contemporary Ukrainians,” The Voice of Ukraine wrote.