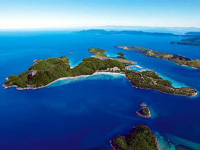 Yulia’s computer, which the police withdrew from her apartment within the scope of investigation, contained a part of the materials that were subsequently included in the criminal case.

“There were photographs, but do they change anything? I am not 18 after all. Those images have never appeared on the internet and I have never worked as an online model,” Yalovitsyna said.

The contest for the best job in the world, which is held by Tourism Queensland and the government of Australia’s Queensland, attracted more than 34,000 applicants. Russia’s Yulia Yalovitsyna comes second with 38,658 votes. Her major rival is from Taiwan – 96,231 votes. The third place is taken by a national of Canada – 24,863 votes.

An applicant is supposed to leave a video message on islandreefjob.com. One of them will be eventually invited for an interview. All applicants must swim well and have good language skills.

The winner will be paid $9,000 a month. The caretaker of the Great Barrier Reef island will be provided with free plane tickets and a free accommodation in a house with a pool and a golf court.

The duties of a caretaker will include: watching whales, snorkeling and taking care of luxury spa treatments.