Anatoly Konenko, a resident of the city of Omsk in Russia’s Siberia, decided to show respect to his favorite poet Alexander Pushkin who died in a duel 172 years ago and made a book of rose petals on whiche he wrote ten Puskin’s poems about roses. Anatoly also put the pictures of his own in the book. The book consists of 28 petal-pages and is measured 27 х 32 milimeters. 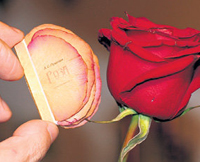 Anatoly Konenko is an architect. In the beginning of the 1990s he began studying microminiature.

Konenko didn’t have necessary tools so he had to go to Moscow to visit Stanislav Fedorov eye microsurgery clinic. He prepared a special gift to Stanislav Fedorov - Fedorov’s portrait on an artificial eye crystalline lens.

Fedorov was so impressed with the work that he told his colleagues to give Anatoly everything he needed. Konenko went back to Omsk with a big box of microtools.

Now many celebrities have the masterpieces of the talented Siberian master.

Former Soviet President Mikhail Gorbachev and President of the Republic of Belarus Alexander Lukashenko have Konenko’s miniature books in their collections.

American presidents George Bush and Jimmy Carter have rice seeds with their portraits on them made by Konenko. And for Vladimir Putin Konenko shoed a flea. The flea’s shoes were made of gold. It took Anatoly seven years to shoe the flea.

“I am an owl and I work when everybody sleeps. The absolute silence and special breath is needed to make right movements by the cutter. It took me about a year to create books of rose petals. Now everyone can read them using a strong magnifier,” says Anatoly Konenko.