The life of a man depends on a pair of socks

Socks play maybe not the most, but a very important role in men’s life. Men’s socks were honored in an episode of Sex and the City TV series, when Carrie Bradshaw presented her philosophic views on this piece of men’s apparel. This seems to be quite surprising because socks may often drive women mad when they see or smell them. Socks may also become the reason of family scandals. 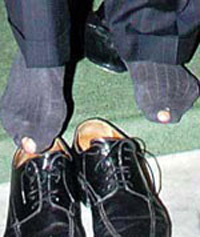 The life of a man depends on a pair of socks

Socks play a very important role in the life of every man. His professional career or romantic achievements may often depend on a pair of socks. A woman may find out a lot about her man if she takes a closer look at his socks.

Needless to say that women, just like men, pay a lot of attention to men’s tastes in clothes. A pair of socks is a very important accessory in men’s clothes, just like ties, watches, sleeve buttons and wallets.

Indeed, a pair of socks can tell a lot about its owner. Rational and practical men mostly choose black socks for black is a universal color that fits everything. Gray or brown socks would be the choice of conservative men who do not welcome changes in their lives. Green socks attract military men and those who associate themselves with Greenpeace activists. Blue socks indicate the romantic nature of a man. White socks are the best choice for those men who like sports and those who go on holiday. White socks give a lounge look to a man, especially when he wears them with jeans or shorts. White socks are out of the question when it comes to wearing business suits.

If a man wears red socks, it means that he has his own sense of style. Red socks may also mean that he does not care a thing about style.

World’s leading designers scratch their heads over the appearance of men’s socks. Socks are quite familiar with modern-day fashion trends. Socks can be adorned with various ornaments which may also point out men’s character traits.

Ornaments of rhombs or lines indicate that a man is searching for his place in this life, or maybe for the point of this life. Flowers, little suns and rabbits may expose a playboy or just a man with a good sense of humor. Those who prefer classic style choose pinstripe and checkered socks.

Socks have a glorious history. They evolved from leather shoes that covered the sole, the heels and the toes. Greek women used to wear those shoes to keep their feet warm during sleep. Afterwards, people began to put pieces of fabric inside clodhoppers to protect feet from calluses and scratches. Socks celebrated their triumph in Rome 100 years later when they covered both the foot and the shank, slowly turning into stockings. Ancient poets began to glorify socks as the best clothes that human feet could have.

Knitted stockings appeared in Spain only in the 16th century. Those were very expensive and hard to find garments – a pair of stockings could be an excellent present to noblemen and even kings.

Stockings turned into socks during the second decade of the 19th century when men donned tight pantaloons. Finally, socks became even shorter during the First World War to economize fabric.