Michelle Obama, the wife of the 44th President of the United States, will grace the cover of the March issue of Vogue magazine, the most influential magazine in the fashion industry. The glossy encyclopedia of style and beauty has published the photos of perhaps all First Ladies of the USA. Michelle Obama will be the second one of them to grace the cover of the magazine, following Hillary Clinton, Itar-Tass reports. 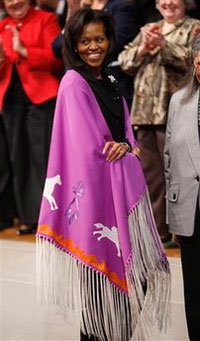 Vogue will dedicate eight pages of its March issue to the First Lady of the USA and publish an interview, which Michele Obama gave the magazine prior to the inauguration ceremony in Washington.

In the interview Michelle promised to take her daughters to school every morning, every time she could. "I'm going to try to take them to school every morning - as much as I can. But there's also a measure of independence. And obviously there will be times I won't be able to drop them off at all. I like to be a presence in my kids' school. I want to know the teacher; I want to know the other parents," Michelle said in the interview.

The magazine will definitely tell of First Lady’s style and taste. It is worthy of note that Michelle, unlike other guests of the respectable magazine, picked the outfits for the photo session herself, without Vogue stylists’ help.

Michelle appears on the photos wearing the outfits in which she has already appeared in public: a black dress by Narciso Rodriguez, which she wore on the voting day, as well as a magenta dress by Jason Woo, who designed her ball gown for the inauguration.

Vogue editors believe that Michelle Obama has a very good taste in clothes and that she knows what looks good on her. Andre Leon Talley, the author of the March issue cover story, said that he admired Michelle’s easy manners. "She's so accessible, natural and normal. There's nothing affected about her," he said.

Mrs. Obama said she was aware of how much public attention her wardrobe was getting, but added that she made no apologies for her choices.

"I'm not going to pretend that I don't care about it," she said. "But I also have to be very practical. In the end, someone will always not like what you wear — people just have different tastes."