Saudi Arabia: A man of 47 marries girl of 8 to cancel debt

Judge refuses to annul wedding. Mother’s petition not accepted because she is not the child’s tutor. The girl’s father arranged the marriage so as to cancel his debts. 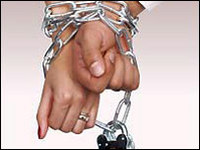 Saudi Arabia: A man of 47 marries girl of 8 to cancel debt

According to the CNN website, Judge Habib Sheikh Abdallah al-Habib rejected a petition brought by the mother of the girl because "she is not the legal guardian of the girl, " quoted the lawyer, Abdullah al-Jutaili. The same source said the father, separated from the mother, arranged the marriage with a friend to settle their debts.

Human rights organizations say that the incidence of marriages between adults and children in Saudi Arabia violates international standards signed by this country.

The judge stipulated however that the man should not consummate the marriage until the girl is an adolescent and then when she is, sha can file for divorce.