Oksana Kondrashkina, a resident of Novosibirsk, one of the largest cities in Russia’s Siberia, received a record compensation Monday for the medical error, from which she suffered four years ago. The woman had to have her leg amputated because of an incorrect diagnosis. The compensation amounted to 2.139,000 rubles (nearly $60,000), which is an extremely rare incidence in Russia’s judicial practice, Interfax reports. 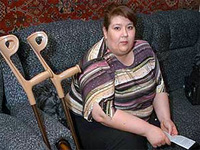 The court awarded the compensation to the woman in November 2008, but she woman received the money only this week.

“This is a unique case in Russia’s court practice. They do not usually pay out such large amounts in Russia,” lawyer Yulia Stibikina said. The lawyer added that the doctor guilty of the improper diagnosis had been fired from the hospital.

Oksana Kondrashkina was hospitalized in July 2004 after a car accident. She was diagnosed with the dislocation of the knee joint of her left leg. The attending doctor decided to apply a plaster bandage instead of the traction weight. The constricted blood circulation triggered the mortification of the left leg tissue.

“When the doctor removed the plaster bandage, he found the boiled meat effect underneath. In order to save the woman’s life, the doctors had to amputate her leg. She has had three surgeries, which made her a disabled person,” the lawyer said.

Kondrashkina, 36, a single mother of an underage child, was left with no job and no money income.

“Oksana Kondrashkina used to be a saleswoman, but she has been unable to find a new job for four years now,” Yulia Stibikina said.

It is worthy of note that about 50,000 people fall victims to medical errors in Russia every year. The errors mostly occur due to the lack of medical competence. Incidents of criminal negligence most frequently occur in hopeless cases, in which patients are already doomed. Victims of car accidents, obstetric and cancer patients make the first three categories of the group.

However, a pensioner from the Tyumen region of Russia won over 170,000 rubles ($4,700) by court action from a local hospital for poor quality treatment in December 2008.

The 56-year-old man was hospitalized October 2, 2006, with a closed fracture of his leg. The mistakes, which doctors made during surgery and treatment, resulted in the sepsis of the wound and the improper synostosis. The man received the third degree of disablement and sued the hospital.