There are now a record 47 million Americans without health insurance, while the percentage of children without insurance rose for a second consecutive year, according to newly released US Census Bureau data. Medical tourism, in order to obtain affordable health care, is beginning to be a necessary option for some as US citizens go to Cuba for medical procedures, Canada and Mexico for medicine and to Mexico for elder care. 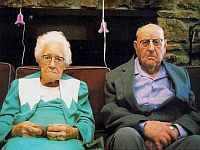 As the economy crashes in on many older Americans and their savings, more and more are looking to Mexico for the solution to their assisted living needs. With 75 million baby boomers heading toward retirement and the cost of private nursing care in the US greatly outstripping retirement funds, Mexican developers say they have an irresistible product in the works: active senior and assisted living facilities in a warm climate full of friendly people for as little as $1,100 USD a month. The monthly charge also includes food, housekeeping and personal assistance. In the US, such facilities usually cost from 3-5,000 USD per month.

The drug cartel violence that gets so much corporate media coverage rarely touches civilians. Mexico is as safe as or safer than the US. Many Americans will come perhaps not because they want to, but out of necessity and will find Mexico far more modern and far safer than they had imagined.

One retiree in Mexico reported that he has satellite television in his facility, so he doesn't miss any American news or programs. When he wants to see a movie or go shopping downtown, the taxi ride is only $2-$3 to Guadalajara, a culturally rich city of 4 million people, just 30 miles away

There are up to 50 Mexican cities and towns that are ideal for assisted living facilities aimed at the US and Canadian markets and the timing for the development of these facilities is just right as the baby boomer generation is entering retirement age. One thing that operators of the new facilities call a major selling point is not just the price, but the Mexican-style care that comes with a society used to caring for their parents and grandparents throughout their lives.

One problem, according to some health care lobbyists, is a lack of regulations. The private assisted living and nursing industry is so new in Mexico – there are about a half dozen facilities under construction – that laws need to be written to cover their activities. However, the Mexican Association of Retirement Communities is lobbying for legislation similar to that in the US.

Mexico has a national health care system (which Americans can buy into for only $350 a year) along with many private hospitals and clinics with US trained doctors. Average life expectancy for Mexicans is 75 years, just three less than in the US, according to the retirement organization AARP (American Association of Retired Persons).

Since most Mexicans take care of their parents until death, there has not been much of a nursing home industry at all, except for those run by charities or the government. It is shameful that in the US many have no health care at all and cannot afford assisted living services. Taxpayer money is a shame to waste on wars and other foreign adventures. The society has also not progressed to the point where Americans take care of their aging parents.