The doctors, who examined an elderly Chinese woman complaining of stomachaches, were shocked to find out that the lady was pregnant. The woman was carrying her unborn baby inside for 60 years. 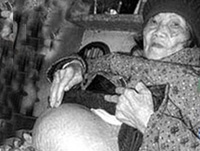 Huang Yijun from a province in southern China has recently celebrated her 92nd birthday. The story of her pregnancy began in 1948. She was several months pregnant when doctors told her that her fetus had died. The woman was supposed to have a surgery to have the baby removed from the uterus, but the price of the operation was $200. Yijun walked out of the hospital immediately after she was told the price.

“It was a huge amount back in those days, it was more than many families would make in a year,” the woman said. “I did not do anything, I just ignored them,” she added.

The baby that died in Yijun’s womb in 1948 reminded of its existence in 2008. The woman hurt her belly and developed stomachaches. She asked for medical help, and doctors conducted the ultrasound examination of her abdomen.

“I couldn’t believe my eyes when I discovered she had a baby in her belly. I’ve been a doctor for more than 40 years and it’s the first time I have seen something like this,” Doctor Liu Anbin said.

The medics did not let the woman go home. She was hospitalized for a series of additional tests. A dead fetus usually decomposes, which is a life-threatening process for a woman, but it was not the case with Huang Yijun. Doctors do not realize how the woman managed to stay absolutely healthy for so many years.